The natural reverberations produced by spring tanks have fascinated musicians and listeners for decades. This unique piece of equipment has become ubiquitous among countless styles and genres of music. It’s an effect that has defined the sounds of many amplifiers, synthesizers, and studio gear. Mod® reverb tanks are produced to capture the essence of what makes this effect so special. 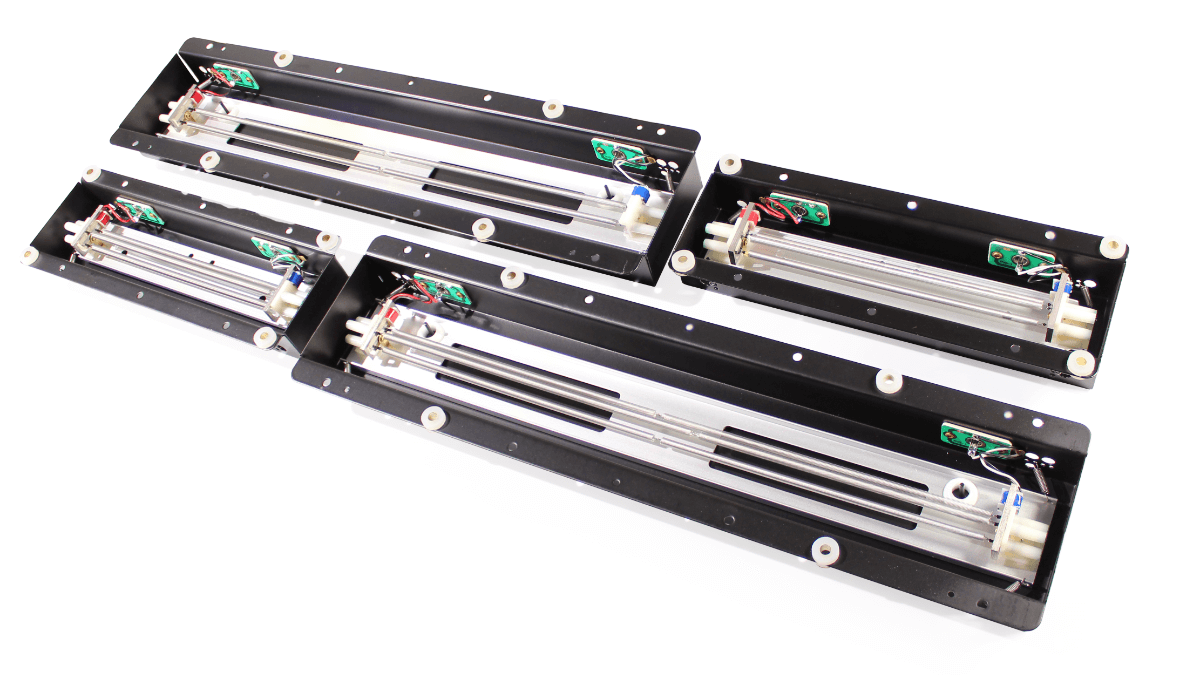 The innovation of the spring reverb tank was revolutionary. Musicians were no longer bound to massive devices such as reverb chambers or plate reverbs that could only be housed in professional recording studios. The beautifully simplistic spring tank was small enough to fit inside their instruments and amplifiers and produce a quality of reverb that is still unrivaled in many ways. Mod® reverb tanks are constructed using the same methods and materials as these original devices.

From Audio to Magnetic Fields 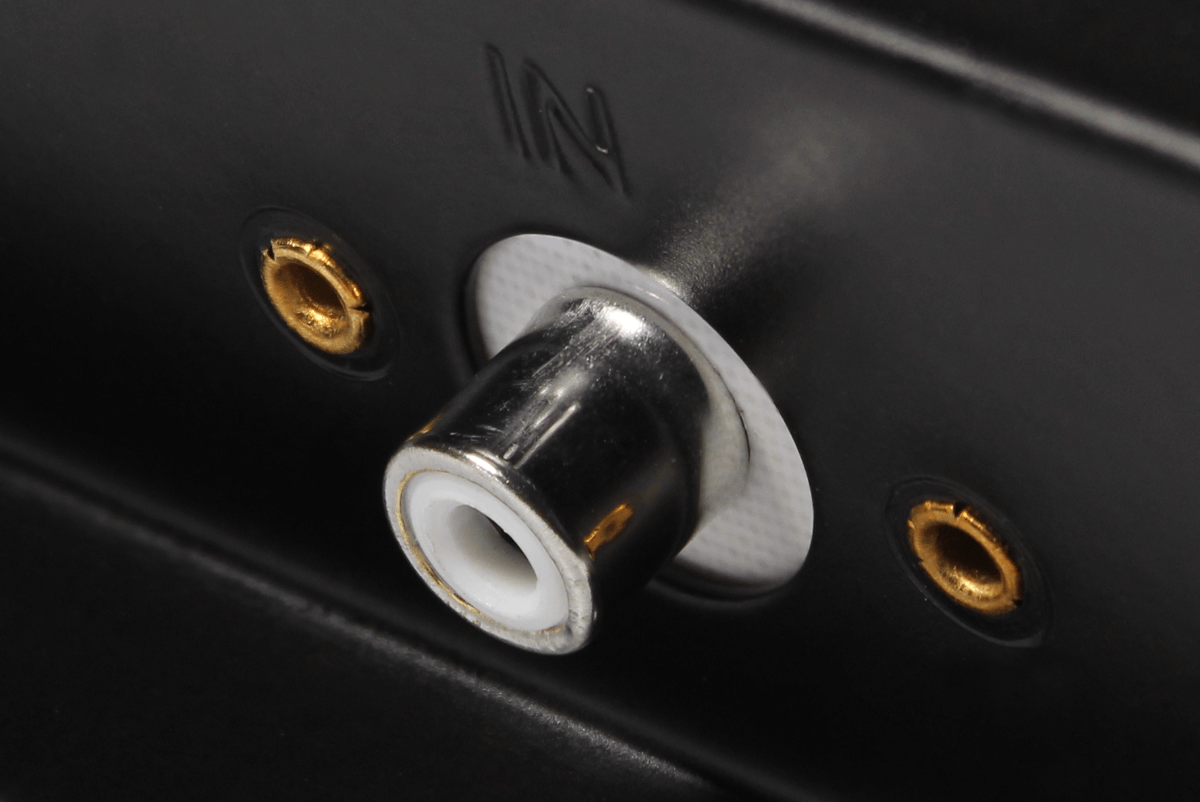 The incoming signal starts its journey at the jack labelled IN. Mod Tanks feature a hardwired RCA jack connected directly to the transducer with a configurable grounding scheme so users can easily modify their tank to fit their equipment if necessary. Many contemporary tanks use a connector instead of a soldered connection which can often result in intermittent or broken connections. For this reason, all connections are soldered in Mod tanks. 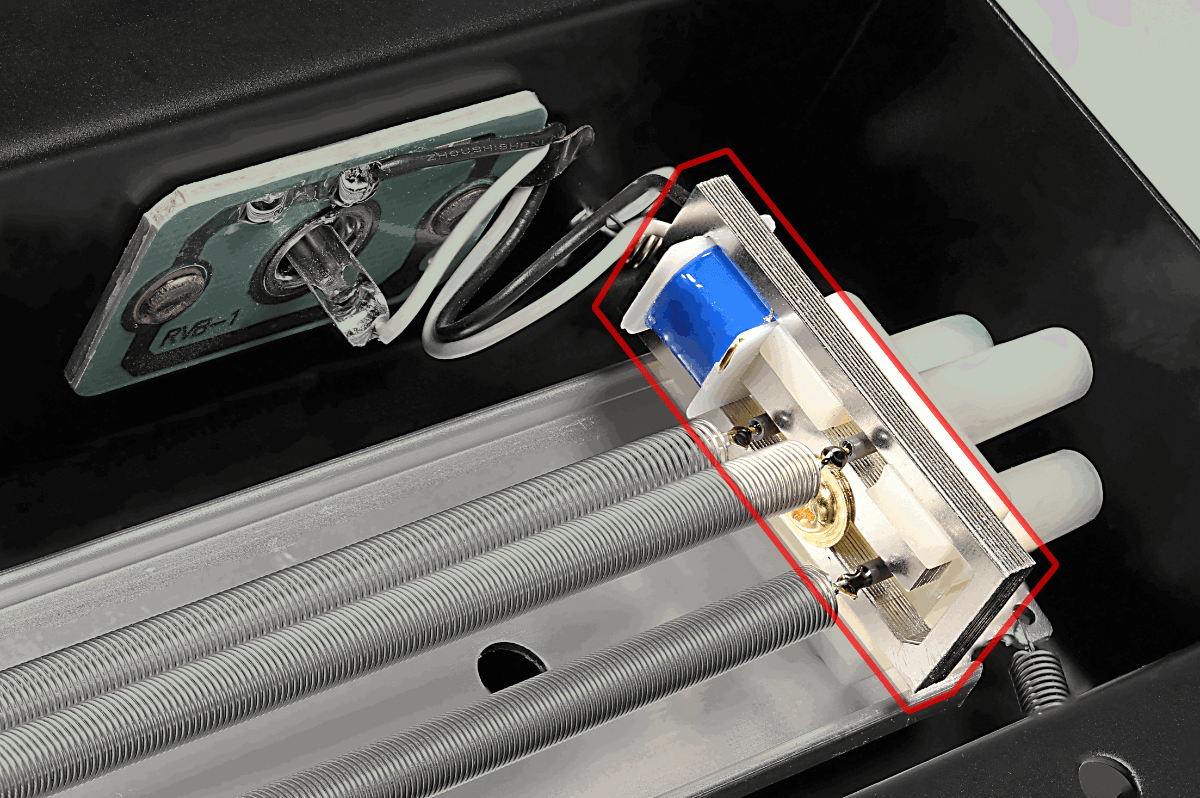 Image: Detail of the reverb tank with the transducer highlighted

The transducer is where the magic begins. Mod tanks use high quality transducers that closely match the behavior of transducers found in classic reverb tanks. The transducer consists of a coil that is mounted onto a stack of thin metal leaflets called lamentations. When the electric audio signal is applied to this coil, it creates a magnetic field that changes relative to the signal applied. This means that when a frequency such as A4 440 Hz, is applied to this transducer, a magnetic field is simultaneously pulsing at 440Hz around the transducer. The audio has been transformed into magnetism. Depending on its impedance, different circuits will be used to drive the transducer. Mod tanks come in a variety of impedances to match these different circuit types.

Waves Across the Springs 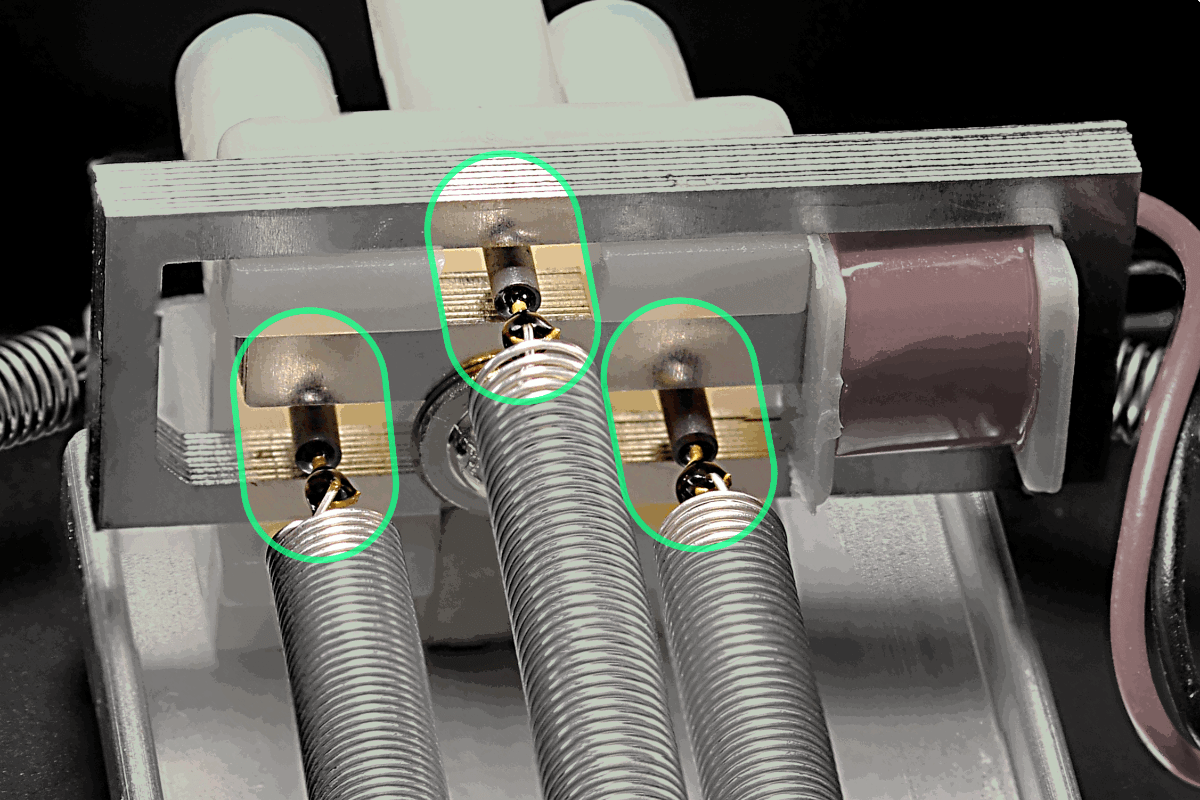 The springs are mounted directly onto magnets which are suspended in the gap of the transducer. The pulsing magnetic field is now affecting these magnets causing them to rotate at the same frequency as the audio signal. This signal has been transformed from electricity, to magnetism, and has now become a physical vibration much like that of a guitar string. Since these are loose springs, we cannot hear the audio without amplification like we can on a guitar, but the concept is somewhat similar.

The vibrations will now travel down the springs like a wave moving across the ocean.

To note: the vibrations in the springs of a Mod Reverb Tank are actually caused by a torsional wave (a twisting motion rather than up-and-down motion). This type of wave can be difficult to visualize, so for the sake of simplicity, you can think of these vibrations as if they are an up-and-down or "transverse" wave.

The springs in Mod tanks are designed to provide different decay rates. The decay rate is the length of time it takes for the vibration to completely dissipate. Depending on the playing style or equipment used, tanks with different decay lengths can provide versatility in the sound of a spring reverb. See our Compatibility Tool to learn more and listen to the different options.

The waves moving across the spring and reflecting at each end are very similar to how sound waves behave in a room. In fact, it’s common to use a spring as a model when explaining how sound works. Instead of vibrations moving across a spring, sound vibrations move through the air. When sound waves hit a surface like a wall, they will reflect just like the wave on the spring. In an empty room, the sound can more easily bounce around. Each time it passes your ear, your brain registers the sound. This is happening very quickly with the sound dissipating on each pass so the result is a decaying reverb. This is why empty rooms, long hallways, tunnels, and other larger enclosed places have a natural reverb.

Transforming Vibrations Back into Audio 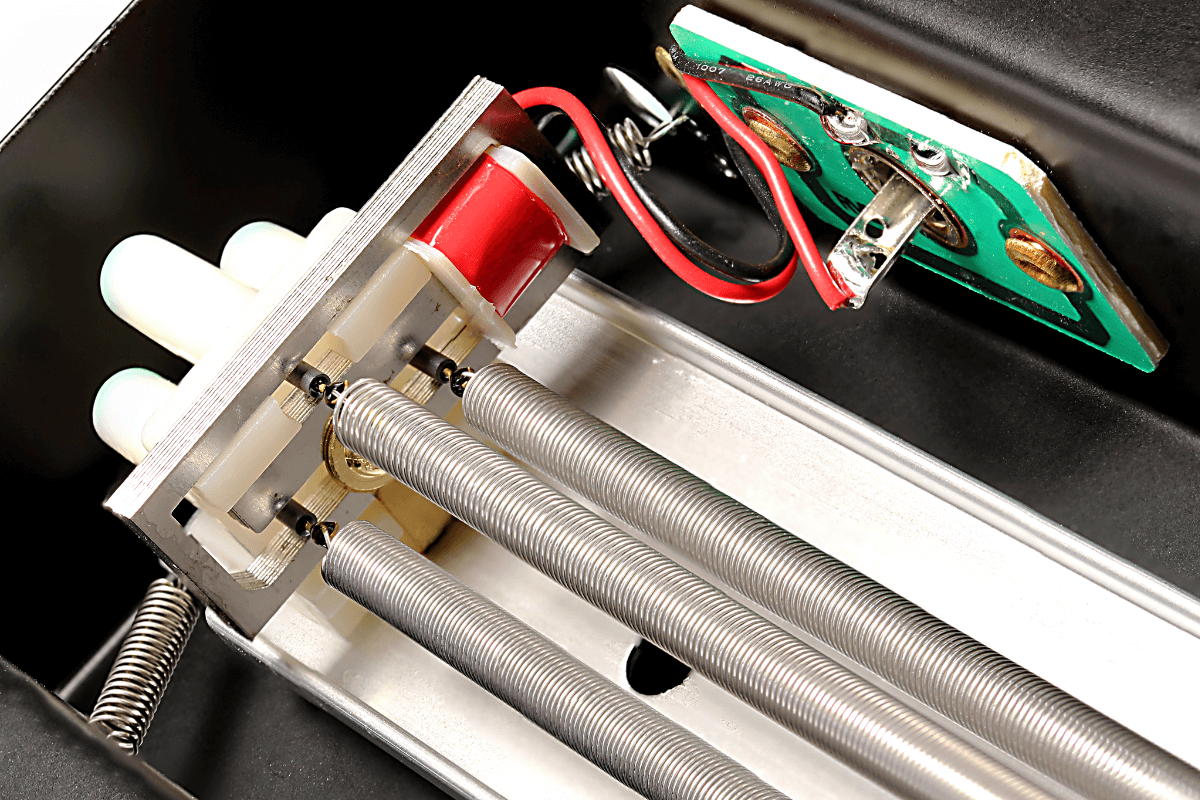 In the spring tank there is a second transducer at the opposite end of the spring that you can think of as the ear in a room. Instead of a signal coming in to manipulate the springs through this transducer, it works in the exact opposite way. The wave passed through the spring from the first transducer affects the magnet suspended in the gap of the second transducer. The moving field of this magnet interacts with the coil of the transducer to create an electric signal that is carried through the wires to the RCA jack labeled OUT. The vibrations from the first transducer are now transformed back into an audio signal. As the vibration reflects back and forth, it generates this signal each time until producing the reverb effect. 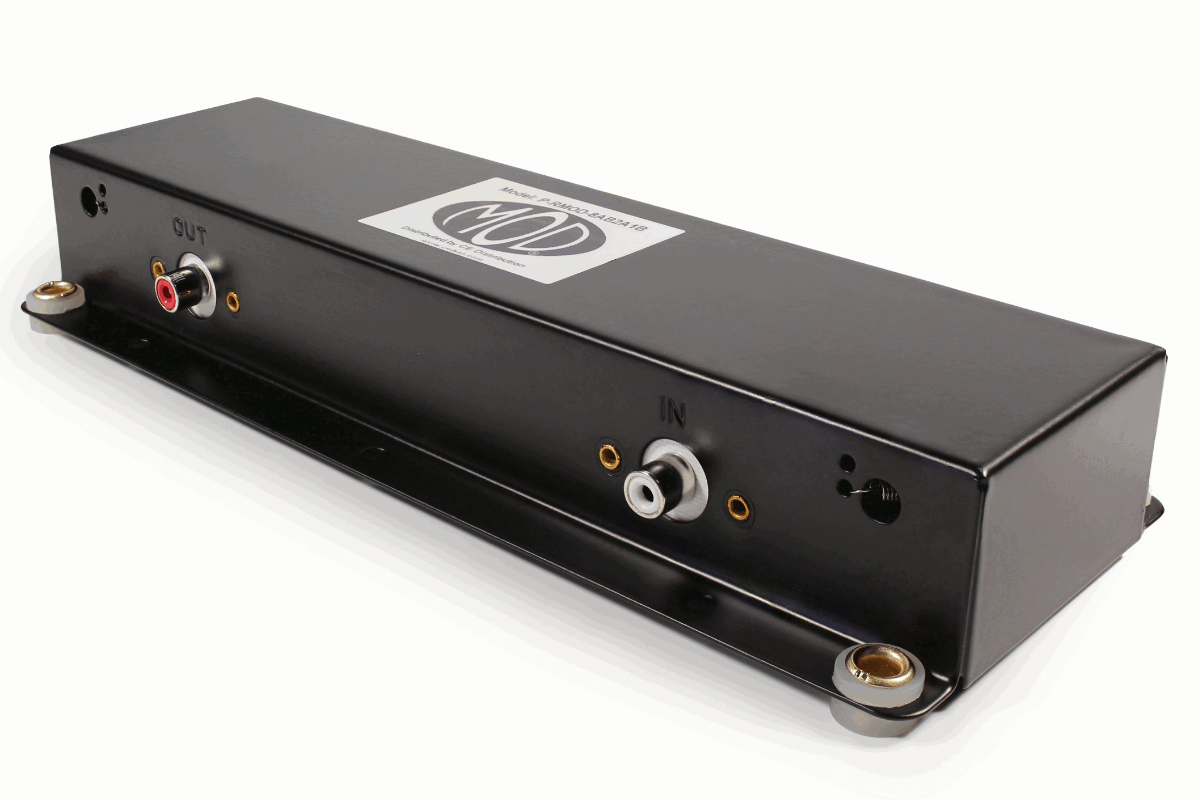